The Higher and Lower Self in Great Stories

I’ll begin with a description of our central characters. The lower self controls how we selfishly compete with each other to survive in a competitive, dog-eat-dog, big fish eat little fish world. The higher self controls how we live together in perfect harmony in groups that internally behave unselfishly and are guided by the collective wisdom of a non-competitive, highly co-operative society. So – obviously, these two irreconcilable forces are in serious conflict with each other.

In the last several story course articles, I talked about the conscious archetypes (the hero and the antihero) and the seven creative unconscious archetypes. In this article, I will describe the important role being played in great stories by the higher and the lower self.

As I’ve mentioned, the purpose of the passages (aka the Hero’s and the Antihero’s Journey) is to guide us through a reenactment of the evolutionary stages of our development from early childhood to fully realized human beings. The hero and the antihero are personifications of our conscious selves. The love interests help lure us into the adventure. The tricksters goad us forward when we get stuck. The threshold guardians confirm we are sufficiently prepared, and the four remaining archetypes – the physical, emotional (social), mental, and spiritual mentors and helpers give us special physical, emotional, mental and spiritual guidance and support.

Needless to say, you don’t have to have all of these characters in your story, just the ones necessary to reveal your particular story.

That said, these players, these archetypes are organized in a hierarchy – the physical, instinctual self has been superseded by the higher, spiritual self and they’re in conflict. There is a rivalry between them, a struggle for power. The higher spiritual dimension is above, the lower physical dimension is below, and the conscious element, which they are both trying to influence, is caught in the middle. 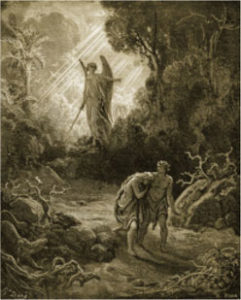 In John Milton’s Paradise Lost, which is based on the Bible story about Adam and Eve, a great battle is fought between God and Satan for control of Heaven. Satan loses and is condemned to Hell (aka Hades and the underworld.) As part of Satan’s counterattack, he turns himself into a serpent and goes up to the Garden of Eden to corrupt God’s new favorites, Adam and Eve. He tempts them with an apple that can give them some of God’s great power. They break God’s law and are driven out of Paradise.

What does God represent in this story? What does he personify? The higher spiritual side of our nature. What does the serpent, Satan, represent? The lower, physical, instinctual, animal side of our nature. And in this story we see that Adam and Eve, who were once inspired by the higher self are now, with the arrival of the serpent, giving in to the temptations of the lower self, which results in their connection to the higher self being cut off. 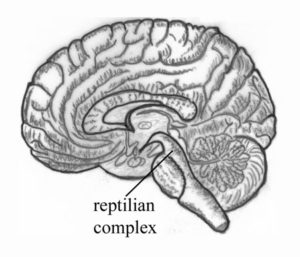 It’s curious that Satan turns himself into a serpent because the snake is a perfect metaphor for the lower, primordial, physical self, which is, in fact, a reptile brain, the R-complex, the source of our most basic physical instincts, appetites and drives – which, like the three lower chakras, control survival, hunger, sex, anger, aggression, power, and greed.

It might interest you to observe that in Michelangelo’s painting on the ceiling of the Sistine Chapel, wherein God is about to touch the fingertip of Adam, God and his companions are framed by what looks to be a cross-section of the human brain. 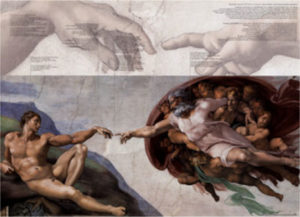 Using Star Wars as another example, what does the Force represent? The same thing as God. It’s another term for God – but it means the same thing – the higher, spiritual side of our nature. What does the Evil Emperor represent? The same as Satan. The lower, physical, animal side of our nature. The villains are all personifications of these same lower, dark forces.

In real life, when people are taken over by these dark forces they become serious criminals, drug lords and tyrants. What makes some people murder, steal, and rape? This is the dark side of our nature. All of the villains and dark forces in story are inspired by this one source. They are all variations of the same theme – of which Satan or the Devil is the archetype.

So if God is our higher, spiritual self and the serpent is our lower, primordial, physical animal self, what is Adam and Eve? and Luke Skywalker? What do they personify? Our conscious self – that special part of our psyches which monitors the world through the five senses and makes choices and decisions. The hero is the unselfish, positive side of our conscious self, the part that accepts responsibility, resists temptation, and solves problems. The antihero is the selfish, negative side of the ego – the part that gives in to temptation, creates problems, and can be taken over by the dark side. This is William Hurt in Body Heat, Scarlett O’Hara in Gone With The Wind, Anakin Skywalker (soon to be Darth Vader) and Michael Douglas in Fatal Attraction or Basic Instinct.

Another characteristic of the antihero is the will to power and insatiable greed. This is the materialistic, power hungry, tyrannical side of our nature, the side that wants to possess everything it desires, without limit, and control everything it needs. In story, this is Shakespeare’s Macbeth, Michael Corleone in The Godfather, Silver (Javier Barden) in Skyfall, and Voldemort in Harry Potter. In real life, this is Kim Jong-il, Robert Mugabe, Than Shwe, Hitler, Stalin, Vladimir Putin, and countless others.

The higher, spiritual forces and the lower, instinctual forces are trying to influence the conscious forces, which are caught in the middle, in order to control the destiny of some larger entity that’s being transformed like North Korea, Germany or Russia. And because the groups that human beings form tend to organize themselves in similar ways as the psyche, the human group is an excellent metaphor for the human psyche. You can see this important pattern operating in many great stories and successful films.

In Armageddon and The Matrix, the entity that has this archetypal structure is the world, and it acts as a metaphor of the psyche. And the fate of the world is linked to the actions of the hero. In Gladiator, it’s the Roman Empire. In Harry Potter, it’s the Wizard World. In The Lord of the Rings, it’s Middle Earth. In Mulan and Braveheart, it’s a country. In A Christmas Carol, The Sixth Sense, Batman and Superman it’s a city. In all of these entities you can identify the archetypal structure – metaphors inspired by the higher self opposed by metaphors inspired by the lower self and the fate of the entity is linked to the destiny of the hero who is caught in the middle. This important metaphor exactly describes our own predicament – and if you study hundreds of great stories and films, you will see this phenomenon at work. It is one of the more important patterns.

Going Deeper: The Higher and Lower Self