In the previous two story course articles I talked about the characters, actions and events in great stories that create the metaphors that reveal the collective wisdom hidden in our DNA and the details of the passages – which in turn reveal the extraordinary things the great stories are telling us about ourselves.

In this article we will talk about the Storywheel, which is a way looking at the passages that emerge from the patterns hidden in these great stories, and these passages are, in one form or another, reenactments of our evolutionary path, either from the POV of the individual or the species as a whole. 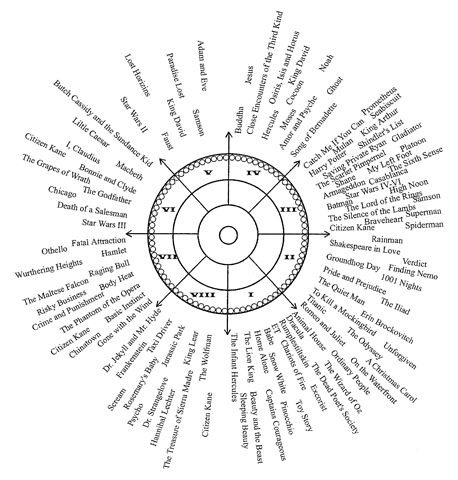 Every great story, ancient or modern, has a place on this Storywheel, and when they’re looked at all together in this way, they give up their deeper, more amazing secrets, and you begin to see how they are all really connected and have a common purpose: to guide us to higher states of being.

On the right side of the wheel, the upside, you have stories with happy endings. The central character resists temptation, performs a selfless act, and ascends to a higher plane. On the left side of the wheel, the downside, you have stories with tragic or unhappy endings. The central character gives in to temptation, performs an abominable act and descends to a lower plane.

All of the stories at the beginning of the cycle have something important to tell us about our maturing psyches and are helping us to connect with ourselves.

In Eros and Psyche one of the tasks Psyche has to perform for Aphrodite to recover her relationship with her estranged husband, the god, Eros, is to sort a huge mound of seven different grains into separate piles. The miraculous helpers that come to her aid are a large army of ants, and these ants are a perfect metaphor for that part of our minds that has the ability to sort complex collections of similar things into separate categories.

E. T. is all about a child’s first encounter with the spiritual dimension.

Dracula and The Exorcist are all about puberty. When I was researching a film I was writing called The Cross and The Switchblade, all of the young drug addicts I spoke to at a rehab center in Bedford Stuyvesant, Brooklyn told me they had become addicted at age 13. Dracula is all about our vulnerability to sex and drugs at that tender age. In The Exorcist, every other word out of the mouth of the preteen the devil has taken possession of starts with “Sh” or “F.” I have two daughters and four teenage grandchildren, so I’ve certainly seen that behavior before.

In the next section, A Christmas Carol shows us how we can reconnect with our society and change our destiny by transforming our characters. When the Ghost of Christmas Future is showing Scrooge his own tombstone, the kneeling, pathetic nearly repentant Scrooge asks him: “Are these things that will be or things that may be?” The answer to that question, and the point of the whole story, is that these are things that “will be,” if he does nothing, and things that “may be,” if he does something about it, if he repents and changes his character. If he changes his character, he will change his future. In other words, at any given moment we have a certain destiny. And, if we’re not content with that destiny, we can do something about it. We can transform our futures by transforming ourselves. If we change who we are, if we awaken our humanity, we can change our destiny. That’s great news.

In Groundhog Day Bill Murray is reliving the worst day of his life. And this is a very profound story. If you are tired of reliving the same horrible day, it shows you exactly what you have to do to break that enchantment – namely, make yourself both capable of love and worthy of love. Now that’s not easy to do, but if you can manage it, you will wake up in a whole new, magical world.

Armageddon, Casablanca, and Braveheart can help us connect to the world. And now we’re talking about male and female heroes who are willing to sacrifice themselves for people they don’t even know.

Religious stories and myths like the stories of Jesus, The Buddha, Mahatma Gandhi and the upside of The Garden of Eden help to connect us to the cosmos and the spiritual dimension.

On the downside, it’s just the opposite – and these stories tell us how we can be disconnected from the higher spiritual self, the world, our society, and ultimately from ourselves.

In The Garden of Eden, after the arrival of the serpent, the story tells us that if we fall too strongly under the spell of the lower primordial self, we will be disconnected from the higher self (God,) and driven out of Paradise – we will lose that higher state of consciousness.

The Godfather, Macbeth and The Dark Knight tell us how we can be alienated or disconnected from the world.

Othello shows us how we can be alienated from our lovers. Jealousy is one of the things that can do that to our relationships.

And finally The Wolfman, Taxi Driver, Psycho andDoctor Jekyll and Mr. Hyde reveal how we can become disconnected from ourselves.

There Will Be Blood and Citizen Kane are two films that show us all of the stages of this decline. Daniel Day Lewis is being successively alienated from his Spiritual self, the World, his family and finally himself. Orson Wells in Citizen Kane follows the same tragic declension – which is why this story appears in so many different places on the wheel.

No one story contains the whole truth. The process is accumulative. Each story contributes a little bit of the vital information hidden in these great stories and bit by bit each step of the passage is revealed. The more hidden truth the story contains, the more powerful and appealing it will be, the more relevant it will be to our lives and the more likely we are to remember it.

And it all works together to tell us, among other things, how the mind works, how consciousness is developed, and how the structures and dimensions of the psyche interact and are transformed into higher consciousness.

The truth of the matter is that the patterns hidden in great stories are incredible artifacts that have carried critical information concerning our evolutionary path through the ages. But unlike the ancient teeth, bone fragments, stone tools and arrowheads, which reveal a tantalizing but incomplete and ever changing record of our physical and cultural evolution, the artifacts hidden in great stories give us an astounding view of our past, present and future emotional, psychological and spiritual evolution.

And why is this important to everyone else? Because if you work with these magnificent tales, and fathom their secrets, you can transform your life into a great story.

When I was seven years old, I wanted to be Captain Marvel, a super hero like Superman. In everyday life, Marvel was a handicapped newsboy named Billy Batson. But when he needed to become Captain Marvel to fight evil or protect the innocent, he cried out “Shazam!” and was hit by a lightning bolt, and that lightning bolt transformed him into the superhero.

On Thanksgiving of that year, when my whole family gathered at my Aunt Marie’s for our traditional Thanksgiving dinner, I snuck into one of the empty bedrooms and spent three hours alone in that room praying to God to make me Captain Marvel. And with tears in my eyes and all the sincerity I could muster, I promised to use the power only to do good.

After three hours, I stood before the mirror on the dresser, trembling with a sense of destiny and having absolutely no doubt that I was about to be transformed into the most powerful force for good on earth. I cried out “Shazam,” and braced myself for the mega volts.

But nothing happened. I repeated the gist of my vows, clenched my fist and shouted the magic word two more times. Still it was in vain. I was stunned and very disappointed. It severely damaged my relations with the Supreme Being.

Thirty years later I realized that the storywheel is Shazam. The great story is Shazam. That is how we transform ourselves from handicapped, inauthentic newsboys into human marvels, by following that path. The great story uses its imagery to stimulate our imaginations and give us little tastes of paradise which trigger fantasies that lead us to desires for positive actions in the real world. Then as we pursue these goals, the stories guide us through the passages using meaningful connections, each story revealing a little bit more of the truth. And piece by piece, bit by bit, drop by drop, the whole truth is gradually revealed. And, despite ourselves, we find our Selves, realize our dreams, and, like Captain Marvel, Hercules, and King Shahryar in 1001 Nights we reach our full potential. The creative unconscious self is the source of that wisdom and that power. The great story is the guardian of that wisdom and that power. And if you unravel their mysteries and fathom their secrets you can participate in your own creation.