STEALING FIRE FROM THE GODS

The Complete Guide to Story
for Writers and Filmmakers
Second Edition 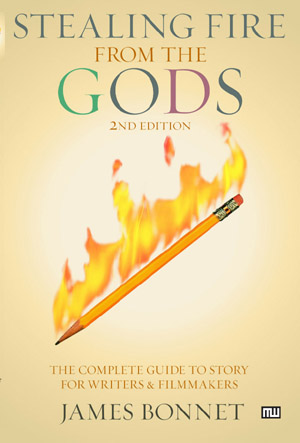 Considered by many top professionals to be the most definitive and comprehensive guide to all things related to story and storymaking, this expanded, completely revised and long awaited second edition of Stealing Fire from the Gods, The Complete Guide to Story for Writers and Filmmakers, incorporates many of the advances evolved in James Bonnet’s professional workshops over the last seven years. These include new revelations concerning the essence of story (that without which there would be no story), the high concept great idea, the structures of the whole story passage, the anti-hero’s journey, the threat (the cause of the problem), the value being pursued, the ultimate source of unity, and the use of the quintessential to make your characters not only memorable and merchandisable but truly charismatic. It also contains a critical assessment of the three act structure, many new and completely revised illustrations, and the analyses of many important new stories and successful films.

Buy a signed copy from the author.

James Bonnet will give you the principles and tools you need to create motion pictures and novels that are packed with emotion – box office hits and best sellers that will resonate for generations.

He will teach you:

Because it contains important new knowledge about story that is not available anywhere else and is relevant no matter what kind of story, true or fiction, you want to create for whatever medium, this book will not only be of interest to writers and filmmakers, but to anyone whose livelihood depends on an understanding of what makes a story great or successful. Its special emphasis is on how the great myths and legends were really created and how contemporary stories with that kind of magic and power can be created again. Armed with this new, deeper understanding of story, there is no limit to the power and art that can be created through them. You will know how to tap powerful creative sources deep within yourself and have the tools to use modern metaphors to create powerful and entertaining stories that have a significant impact on the world.

Stealing Fire from the Gods will also be of interest to psychologists and mythologists. Some important new discoveries have been made in their fields, most notably concerning the new phenomena revealed by the cracking of story’s symbolic code. The secrets of great stories, it turns out, are the secrets of the human mind. And the study of story is the study of this remarkable phenomenon. Every great story reveals some small piece of that magnificent mystery. Unlocking the secrets of story unlocks the secrets of the mind and awakens the power of story within you. Work with that power and you can steal fire from the gods. Master that power and you can create stories that will live forever.

“My advice to aspiring writers is simple: Read this book. There are some real pearls here.”
Billy Ray, Screenwriter of The Hunger Games, Flight Plan, Shattered Glass, Academy Award Nominee for Captain Phillips

“Anyone who is interested in structuring feelings and thoughts into words and story will find Stealing Fire stimulating and worthwhile. A lifetime’s labor of love, it provides the reader with insight and an overview of the creative process through the history of story. I recommend it and congratulate Mr. Bonnet on his accomplishment.”
Elliott Gould, Actor, Academy Award nominee

“Challenging and provocative. Bonnet is a thoughtful and highly intelligent writer whose lifetime of experience has led him to an intriguing theory about how great stories are written. The Golden Paradigm is guaranteed to stimulate lively new debate on the age old question.”
David W. Rintels, Emmy, Writer’s Guild, Peabody Award-winning Writer, Producer

“James Bonnet’s ground-breaking book, Stealing Fire from the Gods, is the fruit of more than four decades of intensive study of various areas –  world mythology, depth psychology, literary classics, and successful modern novels and movies. Bonnet has been able to discover the secret of the psychological power and the emotional impact of effective story-telling of all ages and countries and come up with a true Rosetta stone for modern authors – a formula for creating masterpieces. A fascinating book and an extremely useful tool for creative individuals in various avenues of art!”
Stanislav Grof, M.D., Consciousness Researcher, Author ofPsychology of the Future, Adventure of Self-Discovery, andThe Cosmic Game

“James Bonnet isn’t saying the same old thing. He’s about challenging you to look deeply into your own fascination and attraction; to mine your story for the richness and texture that compels you to write; and to connect you to a noble lineage of story tellers. His tools will jump-start and intrigue you. Your connection to your craft will deepen, and your horizons will expand.”
Raymond Singer, Screenwriter of Disney’s Mulan

Stealing Fire from the Gods is like a rediscovered, ancient remedy for the ailing creative soul. Jim has tapped into a wellspring of lost knowledge that goes to the very core of the creative unconscious, unlocking the natural storyteller that is encoded in each and every one of us.”
Bob Camp, Artist, Writer, Director, and Co-creator of The Ren and Stimpy Show

“Stealing Fire From The Gods” is a first of its kind, it gives writers a template to follow in their story creation, a GPS compass and touchstone to keep them anchored during the creative process-a book that needs to be read and reread.”
Gene Hines, original Writer, Producer of Cliffhanger

“Bonnet is a brilliant man. He has drawn from the work of C.G. Jung and Joseph Campbell then has accomplished his own alchemy. The result is a personal transformation the reader can share. Everyone should read it.”
Darryl M. Diamond, M.D., Ph.D.

“I recommend this book for every screenwriter. I also recommend it for producers, actors, and directors with an eye toward Hollywood.”
Pi Ware, Filmmakers Alliance